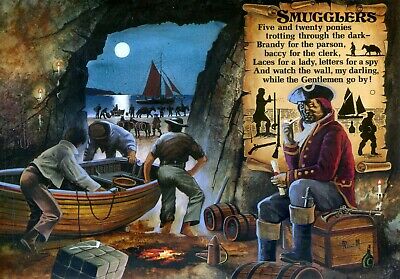 by
Tom Jamieson and Nev Fountain

A second BBC Radio comedy series by Tom Jamieson and Nev Fountain, set in 18th century Cornwall.
If smugglers were the rock stars of the day, then Tamsyn Trelawney was Drumlin Bay's own Ms. Dynamite-ee-ee. But she has plenty of problems to cope with: a has-been father who takes credit for her adventurous exploits, a crew that has less brains than the local sheep, a suspicious Preventive Officer determined to prove she's breaking the law and the local Customs Collector, a keen young soldier from London, who's fallen for her but doesn't know she's a smuggler ... but are they all problems?
Tamsyn Trelawney ... Sheridan Smith
Jago Trelawney ... John Bowe
Major Thomas Falconer ... Cameron Stewart
Captain Marriot ... Andrew McGibbon
Squire Bascomb/Mad Gilbert ... Martin Hyder
Dewey ... Mark Felgate
various characters ... Phil Nice
Broadcast on BBC Radio 4 20 April - 25 May 2004